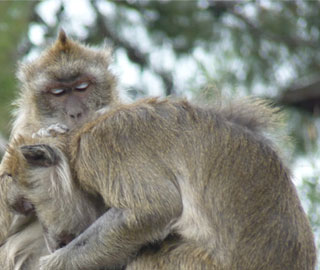 This summer - no riding elephants and no posing with monkeys

July-August is already here, and we are all excited about the freedom. With us at the monkey shelter, too, the excitement is at its peak, the cute summer kids overflow the trails and the monkeys are dipping in the pools as the sun sets. It's time to spend time at sea, in the pool, and for some of us - to travel abroad. Besides shopping, museums and entertainment, what's more exciting in a new and exotic place than local animals? Well, the reality is not what we thought, and we are not alone - 80% of tourists who consume these attractions do not know the problems of tourist attractions that include wildlife. It's easy to make the mistake of knowing the truth:

Every time we enter a shelter, a park or a zoo in Thailand, Sri Lanka or another tropical destination, where we are offered to take a photo with Orange Otan, watch a monkey play a guitar, feed a tiger puppy in a bottle or do a safari on elephants - We appoint a cruel and violent industry. An industry that hunts and captures wildlife from their natural home, separates mothers and offspring and usually kills all members of the family in order to catch the cute kittens for the coveted 100-lakh photo taken at the park. In this industry, the animals are enslaved to entertain us, and we are, innocently, confident that we have reached a place that protects these animals and is committed to their safety. But unfortunately, in developing countries, wildlife regulation does not exist or is not enforced. These breaches of the law allow greedy people to exploit animals for the tourism industry. The suffering is immense: elephants who undergo violent and day-to-day taming processes in carrying loads and passing tourists, and are bound by short, tight chains when they are not working. Orangutan monkeys who are stolen from their murdered families, then violently tamed to perform boxing shows for the public's enjoyment. Monkey monkeys who are kidnapped by their families and sold to clown-made circus performers, who play guitar on stage, and are starved and beaten behind the scenes. Everyone suffers from poor nutrition, lack of interaction with their peers and extreme loneliness, zero veterinary care and, of course, acute (stress) with which they live constantly, until they lose their will to live and collapse.

Of course, our security is also in danger - in 2016 in Thailand alone, 17 people were killed and 21 serious injuries were reported as a result of contact with elephants on captive terms, including western tourists and local residents. This number does not include unreported incidents, so this is a significant underestimation. In fact, in order to feel safe approaching such a wild animal despite the danger posed by them, they are tied up in chains or drugged - you don't think unlucky tigers want you to caress them. He has other ideas about you.

There is also good news - awareness in the world is rising. Since 2016, the world's leading tourism app TripAdvisor has eliminated any possibility of buying tickets to attractions that include captivity with captive wildlife, as we have already posted on our page, which is indeed a big step forward. We, the Israeli monkey shelter, have been dedicating for 22 years to rescuing and rehabilitating illegally traded monkeys who have lived a dreary and brutal life in harsh conditions across the country. Among them are also monkeys who were exploited in small circuses, until they came to us and gained social life with monkeys of species and living conditions for the first time in their lives.

Luckily, Israel has a law that prohibits the use of animals at shows and circuses. It is sad to know that there are thousands more animals in the world that are kept under such conditions for our entertainment. On the other hand, how easy it is to vote in your wallet and make an impact! We are here to say - this summer, do not ride elephants, do not take pictures with Orange Otan and do not pay to feed a tiger puppy!